Kazoo is a new kind of quarterly print magazine for girls, ages 5 to 10—one that inspires them to be strong, smart, fierce and, above all, true to themselves. 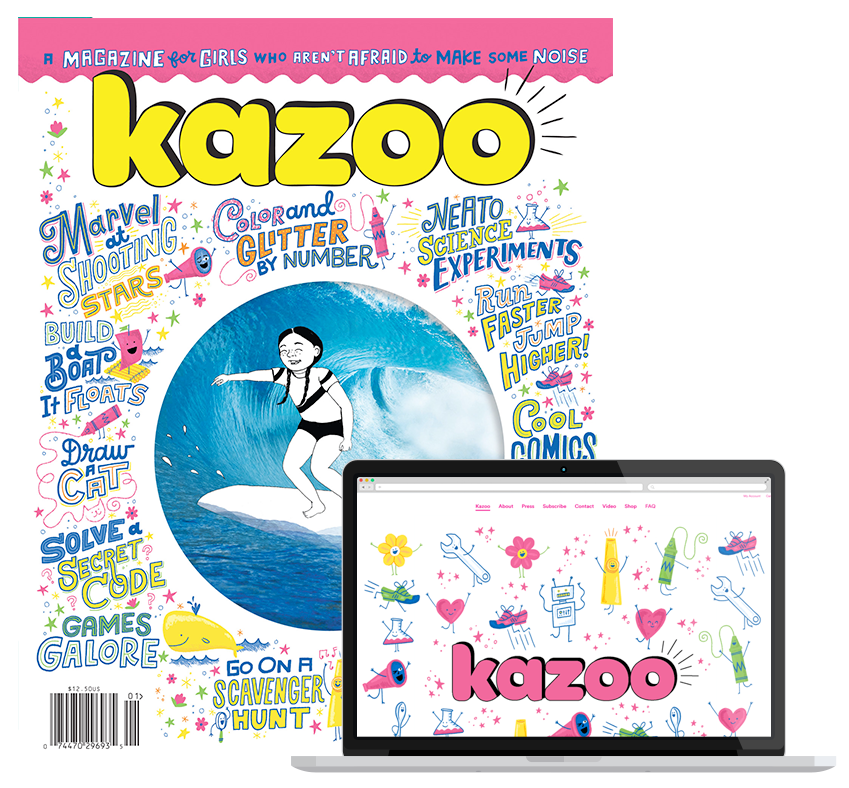 Hi, my name’s Erin Bried, and I’m the founder of Kazoo. Last spring, my 5-year-old daughter and I were looking for a cool magazine to read together, and when we couldn’t find one we loved, we decided to make our own. (Having spent nearly two decades as a writer and editor at the glossiest publications in the country, I knew we could do it, too.)

So, in April, we launched a Kickstarter with hopes that other people would also be as interested in a magazine that doesn’t tell girls how to look or act, but instead inspires them to be strong, smart, fierce and, above all, true to themselves. It turns out, we weren’t alone in our quest to do better by our daughters. Within 30 days, Kazoo became the most successful journalism campaign in crowdfunding history.

There’s no other magazine like Kazoo. All of our stories are either developed or inspired by top female artists, explorers, scientists, chefs, athletes, activists, writers and others. Regular features include: science experiments; comics; art projects; recipes; interviews with inspiring women from Olympic athletes to astronauts; and fun activities, like secret codes, jokes, mazes, search-and-finds and more.

But why is Kazoo necessary?

When girls are young, they’re not afraid to ask for what they want. They’re not shy about taking up space or making noise. They own their bodies and are proud of what they can do, how fast they can run and high they can climb. They ask questions (and, as any parent knows, sometimes endlessly). And yet, by adolescence, too many begin to question their own voice. The fallout is real. Take a look:

• Six in ten girls stop doing what they love, because they feel bad about their looks. And by age 11, 30 percent of them have already put themselves on a diet.
• Seventy five percent of girls are interested in engineering and related fields, and yet only 11 percent of practicing engineers are women.
• Middle school girls earn higher final grades in science than boys, and yet report a lower sense of their own mastery of the subject, a lower science self-concept and more anxiety about their performance in class.
• By adolescence, girls are less likely than boys to act, and feel, like a leader.
• Adolescent girls are nearly three times as likely to have suffered from depression in the past year, compared to boys.

By celebrating girls for all that they are—smart, inquisitive, creative, brave, strong and, yes, loud—Kazoo will help shore up their foundation, so that by the time they enter adolescence, they’ll be more likely to question anyone who makes them feel small than they’ll be to question themselves.

One more point, here: Girls and women are completely underrepresented in our culture. Look at Congress (80% men); the modern art section of the MET (95% men); the engineering profession (89% men); Oscar-nominated cinematographers (100% men); even children’s books, where boy characters are 3 times more likely than girl characters to appear.

When you’re excluded from the political process, museums, professions, awards, even your own bedtime stories, there is a consequence. The less girls see themselves in positions of power, the less likely they’ll be to believe they can achieve such power. Kazoo is the antidote to this invisibility. It will feature some of the most powerful and inspirational women in their fields, thus giving girls a more well-rounded sense of the world and the possibilities within it.

Kazoo’s first issue, printed in Vermont on 100% recycled paper, debuted in Summer 2016 and promptly sold out! We are continuing to work hard to make something great. We hope you’ll join our merry little band, and help us make some noise.